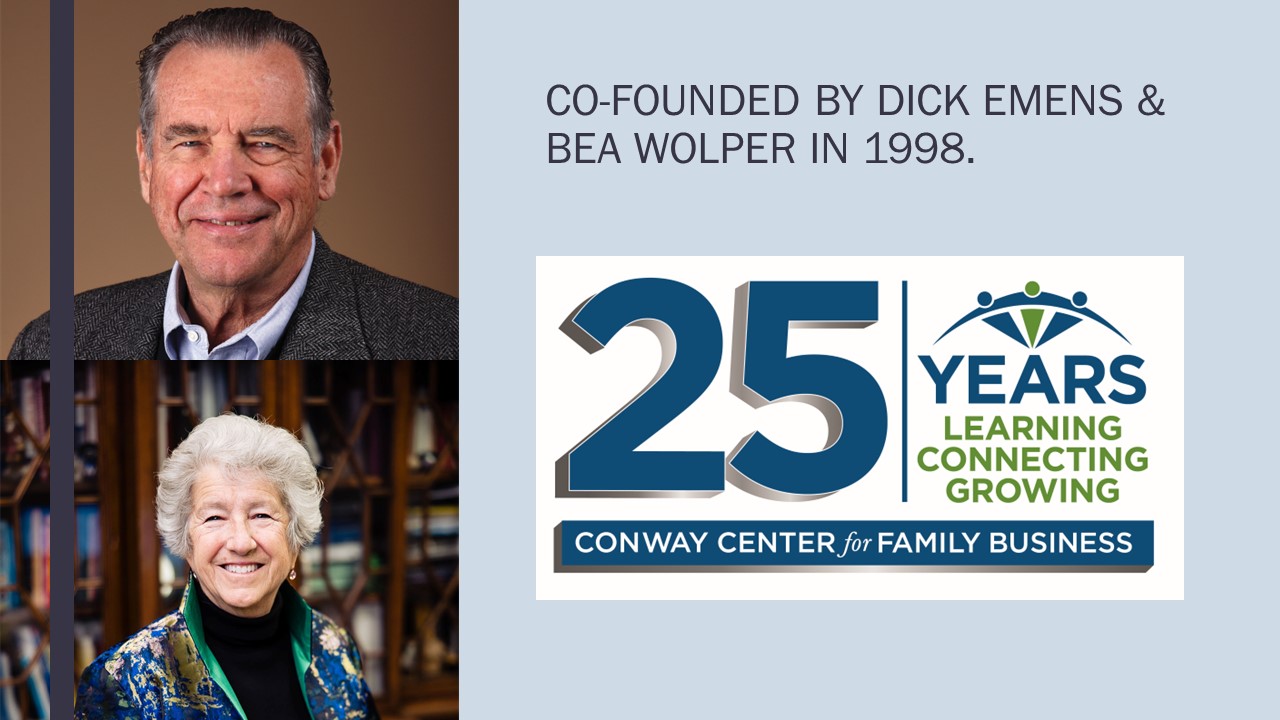 The Conway Center for Family Business is celebrating 25 years in 2023! Please enjoy this first-in-a-series of blog posts chronicling the history and mission of the Conway over the years. Today we start with…THE BEGINNING:

In 1996, Bea was a Board Member of “Attorneys for Family Held Enterprises” (AFHE) and Bea and Dick were partners in what is now the Taft Law Firm; the two of them represented more than one hundred and fifty family businesses, primarily as outside General Counsel.

In that year, Bea attended the annual Board Meeting of AFHE and Dick went along as spouse. During their time in Texas, Dick and Bea spoke at length with the Executive Director of the Family Business Center at Baylor who described how that center provided educational resources for family businesses and helped them get to the next generation.

Bea and her friend and business owner, Tom Maish, sat on several business boards in Columbus, and discussed that there was no entity in Columbus Ohio focusing on family businesses --- which Bea, Tom, and Dick recognized had unique business and family issues.

For the first few years, there was no paid staff and Bea and Dick planned the Programs and invited family business leaders and service providers to speak at monthly meetings held at Franklin University.

From that small group of ten family businesses and three service providers, the Family Business Center of Central Ohio has grown to be one of the largest family business centers in North America with more than two hundred family business members, thirty service providers, a full time staff, large monthly meetings, ten peer groups, and many other educational resources and activities – now known as the Conway Center for Family Business and hosted by Ohio Dominican University – but those are other stories for a later post. Additionally, there are wonderful stories about the incredible volunteer efforts of many family business leaders and services providers, the Annual Awards program which attracts more than five hundred people each year, the 20th Anniversary Hall of Fame event which recognized twenty outstanding family leaders, and much more.

With all of that in mind, stay tuned for the next installment on the history of the Conway Center for Family Business!